10 of the Best (and Most Offbeat) Attractions in Delaware! 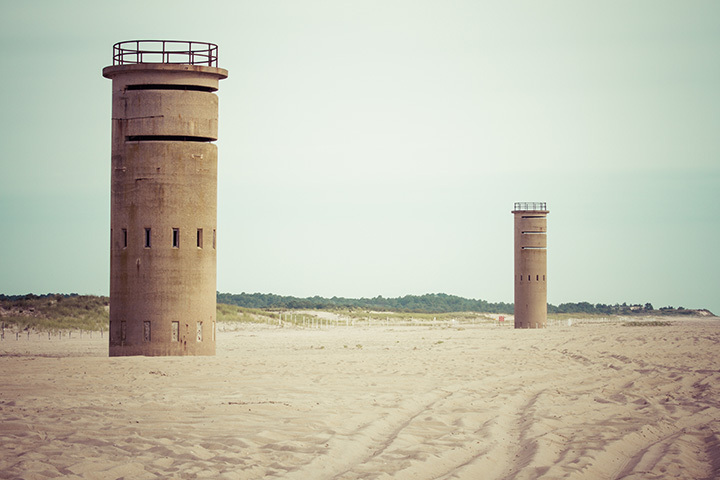 Some of the strangest sights to behold can be discovered in Delaware. On the side streets of small towns, tucked away in the bigger cities, even situated on the docks of the shimmering river, these odd places attract the most curious of visitors. Here’s a glimpse into the weirder side of Delaware with the 10 most unusual places to visit.

This gothic inspired structure was originally crafted for the 2007 edition of Black Rock City's notorious Burning Man extravaganza. Today, the towering eight-ton functional sculpture made entirely from found objects can be seen on the property of Milton, Delaware’s Dogfish Head Brewery. All patrons are welcome to view the exterior but the interior is off limits to non-employees so if you want a closer look you'll have to consider working at the brewery. Photography of the exterior of the tree house is always encouraged.

Delaware definitely cooked up something strange when the state erected the largest frying pan on earth and used it to flay approximately 100 tons of meat in order to satisfy the taste buds of 48 years worth of chicken festival attendees. Today, Delawareans have preserved the peculiar cookware piece at the Nutter D Marvel Carriage Museum.

Upon arrival at this eccentric beach hotel, guests are greeted by a star crown-donning mermaid statue posted just above the welcome sign. Themed rooms and a vibrantly painted, maritime inspired mess hall add to the unique ambience. But what really makes this hotel so unusual are the statues and random art sculptures that are positioned on the grounds and all throughout the house.  Among them are handcrafted, old fashioned bar stools, a statue of a rather large mermaid cupping a tiny dolphin and a sculpted neon fish popping up from a garden in the courtyard.

The Mayflower of the Delaware Valley, Wilmington, DE

Along the glittering Christina Riverfront floats a monumental replica ships that historians have likened to the Mayflower (or at least the historical equivalent of such a vessel). Today, it stands in all its glory as the Kalmar Nyckel, a ship believed to have been involved in the Dutch/English War of 1652 and concluded to have made several voyages to the Americas during the European settlement era. The recreation of the Kalmar Nyckel was a maritime project ten years in the making. Upon its completion, the vessel was positioned in the exact location it was believed to have landed on in Delaware’s past. Guests are invited to sail the seas on this peculiar vessel between the months of April and October as a patriot or a pirate. Aye Captain.

If you like a touch of horror on your journey into strange, this eerie abandoned Pier in Battery Park is a must see. When the sun dips down below the surrounding waters, this former battlefield turned quiet sanctuary takes on the ambience of yesteryear, making the abandoned pier look more like a bridge that drifts off into another world.

Speaking of other worldly elements, Milton, Delaware’s Futuro is a spherical abode shaped like a flying saucer. These idiosyncratic houses are wrought with history and this specific model is one of only two that are publicly available to tourists.

Auto enthusiasts will be pleasantly surprised by a trip to Delaware, a state that consistently showcases the glory of all sorts of vehicles. This means cars, trains, planes and trucks and boy do they showcase trucks! The end of September in Delaware marks a 28-mile romp of the largest truck convoy on the entire planet. As an added bonus, this elaborate oddity benefits the Delaware Special Olympics.

Get a triple dose of weird by venturing onto a lightship instead of a lighthouse and peering out at the world's most grandiose fishing bobber ever created. Why harbor the world's biggest bobber? We're not really sure but this is all taking place on the "Broadkill River" which is just a hop, skip and a jump away from Slaughter Neck Road, making the entire scenario quite strange indeed

A local favorite since the '40s, the Merman, a quirky, foot-long statue that some believe is a real life merman, remains on display at the Zwaanendael Museum. Other creepy maritime oddities can also be seen in this historic museum.

The Tallest Lego Tower on the Planet, Wilmington, DE

As many are well aware, the race to erect the biggest buildings is a thing amongst architects but did you know the competition even extends to Legos? In fact, Lego building competitions get more and more “outside the box” each year. So, when a group of Delaware high school students managed to beat out everybody on Earth by building the tallest Lego tower ever (the structure is a whopping 112 feet high) they were inducted into the Guinness Book of World Records along with other competitive Lego builders.