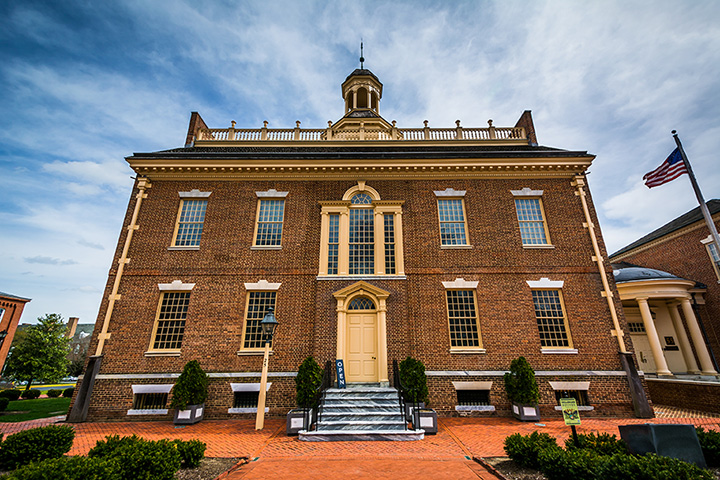 History: It runs all through the state of Delaware like the Christina River, picking up momentum as the years go on, passing down new stories to the coming generation. Since Delaware was technically the first state to establish European settlements, much of that history is well preserved and celebrated. Pre-European Delaware was also a sight to behold and we’ll be covering that as well with our picks for the top 15 historical sites in the state.

The building that was once the capital of the entire state is none other than the Old State House, a stately looking period building that’s almost as well preserved as the history inside of it is. The Old State House Museum goes to great lengths to take its visitors way back in time, revisiting the deep and meaningful history of the Native Americans who once resided on this very land. If retellings of the Underground Railroad and the shoreline settlements of the Native Americans intrigues you, this is a great stop to add to your itinerary.

Classic antique automobiles shine beside a 6,000-square-foot, slate gray mansion that peaks out in the shimmering night, putting on a display that could rival The Great Gatsby. Lovers of architecture and automobiles alike will have an unexpectedly pleasant time at this off the beaten track attraction nestled deep within the newest state park in Delaware. Highlights of the museum include a ride along the old trolley line, a look at the mills of the legendary Marshall family, 390 acres of rolling hills, the largest operating collection of Stanley steam cars in the world and the antique furnishings of a once affluent family on display. Please review their website for scheduling and touring. Hours of operation vary.

Each year, from May through December, history buffs can reflect upon our nation’s past by visiting this tiny museum that puts things into perspective. Witness the ancient relics, jewelry and pottery of the Nanticoke Tribe, currently on display at John J Williams Highway.

An understated landmark if ever there was one, this site is the original rocks that Finnish and Swedish settlers were believed to have set foot on when entering the Americas. Just a stone’s throw from here is the Kalmar Nyckel, a replica ship inspired by this moment in time.

A colossal collection of history awaits in a stately mansion full of opulence and pristine. Winterthur’s Museum, Garden, and Library both holds history and is history. Previously the property of the notable DuPont family, the 60-acre estate complete with full period mansion is fitted with countless historical artifacts and exhibits. From books, to manuscripts to decorative arts and horticultural wonders, history never looked so good on Delaware. Admission packages start at a humble $10 per person and rates escalate depending upon length of tour, membership status, etc. Winterthur is often seasonally decorated and occasionally experiences season based closings so keep an eye on their website for hours of operation as they change throughout the year.

The expansive Red Clay Valley opens up before you as you experience history hands on by taking a train through time. The back roads of Delaware’s history are intricate, jumbled and picturesque, especially from the seat of a historic locomotive. The railroad itself was once part of an 1867 passenger line. Seasonal tours are often made available during select times of the year while varying weekend tours cover a diverse array of historical topics.

The story of civilization can be told from many different vantage points, but this museum brings a whole new meaning to the phrase hidden gem. Museum goers here can mull over 3,000 plus minerals, meteorites and gemstones, many of which belonged to notable historical figures including Delaware’s DuPont family. This museum is nestled within a cluster of halls and galleries with parking located in the Perkin’s Garage. Hours of operation are Thursday through Sunday from noon to 5 p.m. and Wednesdays from noon until 8 p.m. This museum of mineralogical finds reopens from its winter recess in early February.

The history of Milford is housed between the red bricks of this classic vintage mansion. Home of former Governor William Burton, the eerie house on Silver Hill is rumored to be so deeply rooted in Delaware’s past that it connects with paranormal activity.

This classic attraction was first presented to Delaware via the famous DuPont family. With over 77 era-accurate rooms showcasing history and refinement, this richly appointed museum is a local and national treasure. Touring the grounds will give you a glimpse into the mid-1800s and the French influence that was often present in colonial America. The acre-long pool complete with a cascading fountain is certainly a draw but for history buffs it’s the architecture, the sculptures, the figurines and the trim, that make it stand out.

Just along route 54, in the Delmar section of Delaware, is a somewhat overlooked roadside attraction with an odd history attached. It’s the site where Mason and Dixon began dividing the United States. Here is where North went South all the way back in 1764.

Five historic sites come together as one in this 18th century inspired town where period homes are just part of the scenery. Visitors who venture out into this region of Delaware between the months of March and December get the grand tour of: Cantwell’s Tavern, Corbit Sharp House, Odessa Bank, Collins Sharp House, and Wilson-Warner Home. Plus, formal grounds and gardens dressed in their period best. All of these could easily stand as lone attractions but they make an unforgettable impression when joined together.

Let not the history of Delaware agriculture pass you by. This living museum is situated on an old-fashioned mill farm circa the late 1600s. Here, guests get the unique opportunity of seeing life through the eyes of a 17th century mill owner/farmer. Perusal is by appointment only.

Reflecting an era of early colonial America, this peculiar looking 17th century structure has survived centuries of history. Its antiquities and artifacts have been on display since 1937, making this house turned museum one of the longest running bits of living history around. Delve deep into the lives of ancient governors, laborers and architects by signing up to take the guided tour anytime between April and December.

The everlasting history of America’s Civil War is carefully curated and preserved here at Fort Delaware can traverse the river via ferry and explore the Union Fortress that was once the home of Civil War POW’s. This site has a little something for everyone from history buffs to maritime enthusiasts to those who just love good old fashioned soldier stories.

Hagley Museum is arguably the most popular historical site in the entire state. This former industrial site celebrates everyone’s past, from laborers to inventors, from the affluent to even the insane. This is colonial America as told and witnessed by the people themselves. Gardens, gun powder, engines and innovation all come to life for an admission fee of just $14 per adult. Children under five are welcomed in free of charge.

Delaware’s history is so well preserved that this list could get lengthy in no time. What’s even more exciting though, is how much more history is being uncovered as we speak. Stick around to hear more about that.

340 Kitts Hummock Road, Dover, DE
Welcome to the home of John Dickinson, one of the founding fathers of the United States, signer of the Constitution, and "Penman of the Revolution.... Read More

40 East Third Street, New Castle, DE
About Us Old Library Museum, the New Castle Historical Society's space for changing exhibits, where the charm of this building will stir your imagi... Read More

211 Delaware Street, New Castle, DE
About Us: Visitors to the New Castle Court House Museum learn about Delaware's colonial history, early system of law and government, and how its ... Read More

550 Justison Street, Wilmington, DE
Our Mission:The DCM Board of Directors has identified the following mission for the Museum: to inspire children to explore, discover, and celebrate... Read More

255 Academy Street, Newark, DE
Although the Mineralogical Museum was founded with the gift of the collection of Irenee du Pont, Sr., it has grown to encompass specimens gifted or... Read More